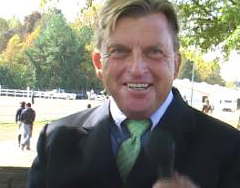 Danny Robertshaw is a United States Equestrian Federation “R” licensed judge and serves as a committee member for both US Equestrian and the United States Hunter Jumper Association. To date, he has judged the Devon Horse Show and the Washington International three times each. His judging resume includes the National Horse Show at Madison Square Garden and the Maclay Finals.

In 2001, Robertshaw received the USEF’s Emerson Burr Trophy as the year’s Equestrian of Honor for the Hunter division, and in 2010 the United States Hunter Jumper Association gave him the Lifetime Achievement Award. Robertshaw and fellow hunter trainer Ron Danta operate Beaver River Farm in Camden, South Carolina and also train out of Wellington, Florida. Together they run a canine rescue (http://www.dannyronsrescue.org), caring for abused and neglected dogs until they are ready for adoption.

Showing Off Your Horse:  (more…)