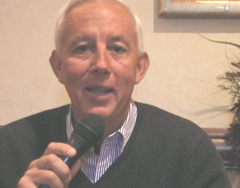 Leo Conroy has served as a judge at every major show in the US as well as The Royal Winter Fair in Toronto, Canada and The Dublin Horse Show. In 2009 he judged the USEF National Medal Final in Harrisburg, Pennsylvania.

As a trainer Mr. Conroy has had success on a National level over his 35 year career, winning classes and Championships at every major horse show in the country including Devon, The Pennsylvania National, The Washington International, The National Horse Show, The Hampton Classic and The Winter Equestrian Festival, Florida Circuit. He has trained a string of successful show horses such as Overdressed, Southern Lights, The Winning Edge, Spectacular Ruler and Calling Card. Leo Conroy has trained ribbon winners in both National equitation finals and trained a past winner of the “World Equitation Final“ at The Capital Challenge Horse Show. In addition, he was honored as the 1997 Chronicle of The Horse Horseman of the Year.

Sadly, Leo Conroy died in January of 2015 at the age of 58. He was that year’s recipient of the Lifetime Achievement Award from the U.S. Hunter Jumper Association.